Magnesium Deficiency - Happening to a Human Near You!

“Do you know that most of us today are suffering from certain dangerous diet deficiencies which cannot be remedied until depleted soils from which our food comes are brought into proper mineral balance? The alarming fact is that foods (fruits, vegetables, and grains) now being raised on millions of acres of land that no longer contain enough of certain minerals are starving us - no matter how much of them we eat.” (1)


This statement was testimony read before congress in the midst of the Great Depression and it is a truism that still is lingering over Americans’ heads today in the 21st century. American soils have become vastly diminished in mineral content leading to the necessity of magnesium’s (among nearly all other mineral nutrients like potassium, calcium, iron, copper, and phosphorus) supplementation for optimal health.

Over the last 50 years, the amounts of protein, calcium, phosphorus, iron, riboflavin, and vitamin C in conventionally grown fresh fruits and vegetables have declined significantly. We know this thanks to rigorous analysis of USDA nutrient data by biochemist Donald Davis of the University of Texas. Similar trends have been discovered in the United Kingdom. 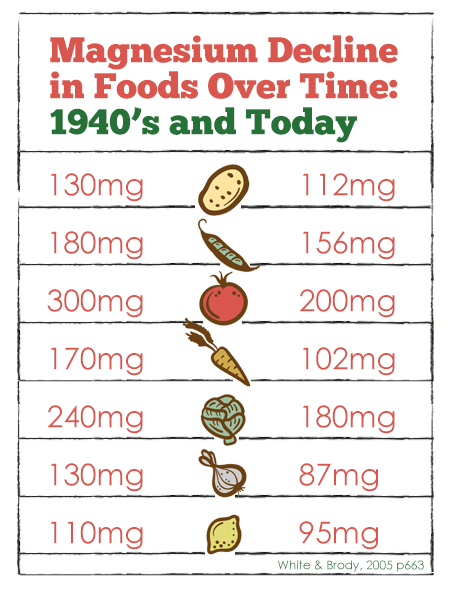 Dietary surveys of people in the United States consistently show that intakes of magnesium are lower than recommended amounts. An analysis of data from the National Health and Nutrition Examination Survey (NHANES) of 2005–2006 found that a majority of Americans of all ages ingest less magnesium from food than their respective estimated average requirement. Typical sources of dietary magnesium such as green leafy vegetables, beans, nuts, seeds, and especially whole grains no longer are enough to satisfy our bodies daily requirement.

Recent technical developments have allowed better assessment of the levels of magnesium in the body, although the blood, which is used in routine testing, contains only 0.3% of the total body magnesium (2). Approximately 50% of the magnesium contained in the body is stored in bones, while the rest exists in the soft tissues, mainly in the intracellular compartment, with less that 1% being present in the extracellular compartment.

How to Maintain Healthy Magnesium Levels

While we all need magnesium for basic functioning, recommended values vary slightly between men and women. The Recommended Daily Intake (RDI) of magnesium for adult men is 420 mg per day, and for adult women the RDI is 320 mg every day (this number increases during pregnancy to 350 mg daily). (3) 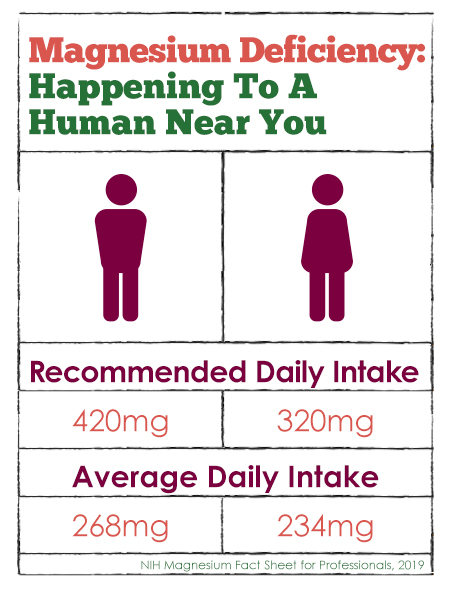 Achieving the optimal daily intake of magnesium every day can be a challenge. Sources of magnesium vary: from whole foods, to grass-fed and pasture-raised livestock, to supplemental magnesium. Many foods contain significant levels of naturally occurring magnesium. For example, the list of whole foods below top the charts in terms of magnesium content. (3)

As a rule, magnesium will always be bound to, or chelated with, other molecules as pure elemental magnesium does not exist alone in nature. This is even true of the magnesium inside of whole foods; it’s just that in food they are naturally occurring bonds. When magnesium is in its whole food form or in an organic (non-synthetic) supplemental form, it is consistently better recognized and utilized in our bodies.

There are several forms of magnesium commonly used in the supplement industry. With magnesium supplements, each differing type behaves in slightly different ways when introduced into the body. Figuring out how much elemental magnesium is actually available to the body in each dose is highly dependent on which molecule the magnesium is stabilized with. For instance, when it comes to magnesium stabilized with organic compounds (such as citrate, glutamate, and aspartate) there is greater absorption than from inorganic magnesium salts. Usage of poorly utilized forms of magnesium can, therefore, result in ineffective supplementation. A study in 2001 indicated that magnesium oxide, an inexpensive magnesium complex, has a fractional absorption in the gut — as small as 4 percent! (4)

Continue Reading our Primer on  Magnesium 101